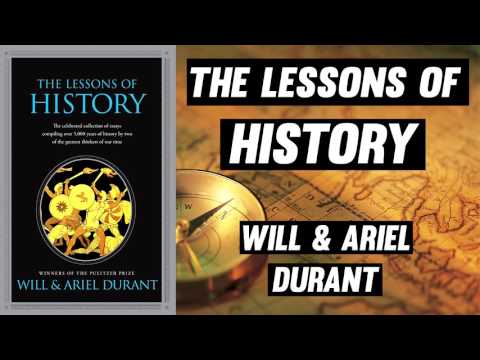 In today’s book of the day, ‘The Lessons of history’ Will and Ariel Durant take us on a journey through history. The Durants reveal the reoccurring themes throughout the last 5,000 years and teach us how to predict upcoming events.

As stated in the book, It’s nearly impossible to condense 5,000 years of history into a single book. That’s why Will and Ariel Durant have gathered their most relevant findings and split them up into lessons.

Lesson one ‘HISTORY AND THE EARTH’

Human history is a brief spot in space, and It’s first lesson is modesty.

It’s difficult to calculate how much of our planet’s history we’ve been a part of. Experts say it’s anywhere between .0015% – .003% of earth’s overall history. The discovery of this data highlights our insignificance and vulnerability on this planet.

Human history is subject to geology. At any moment an earthquake could make entire cities crumble, land could disappear under the ocean, or disease could spread through the same air that is keeping us alive.

Life is competition. Intense competition exists in every aspect of life. Darwin described it as the engine that powers the train of evolution.

In biology, this ongoing competition is called ‘Survival of the Fittest’. We are subject to the process of evolution and to the struggle of survival. In the present day, this means accumulating enough resources to cover our basic needs.

As we developed into social creatures we created groups, states, and countries. No longer needing to survive alone, but to survive as a whole. A war between nations is the group’s way of competition.

Does history prove the existence of God? The Durants say that if you look at the number of people suffering alone, the answer is a resounding no. However, religion has always played a large role in organizing society, in fact, there has been no time in recorded history where civilization was able to sustain moral order without religion.

THE LESSONS OF HISTORY is a must-read! This book just gets better and better every time you read it. There is so much to be taken away from the lessons, including the fact that the history we know is incomplete and probably inaccurate (biased historians).

Most history is guessing, and the rest is prejudice.

View all posts by alonsop7

One Reply to “The Lessons of History”

This site uses Akismet to reduce spam. Learn how your comment data is processed.